You may be surprised to read that some of the world’s largest buildings are warehouses and distribution centres. Of course, amongst the top ten largest buildings there are plenty of aircraft and assembly facilities, plus a NASA vehicle assembly building. However, amongst this list of truly gargantuan structures you’ll find the Import Warehouse of Target, the US retail giant, ranking in 2nd place and Tesco’s distribution centre in Ireland taking 7th position.

The Target Import Warehouse is officially the largest warehouse in the world and the world’s 2nd largest building behind the Boeing Everett factory. This colossal building in Lacey, Washington was created to handle the distribution of imported goods from overseas suppliers to Target’s 37 regional distribution centres throughout the US.

There are four of these gigantic import warehouses in use by Target, but the Washington facility is by far the largest, with an astounding 2 million square feet of floor space. We cannot even begin to comprehend how many miles of shelving are used in this warehouse.

A little close to home, this monstrous warehouse and distribution facility is the largest in the UK. Amazon has been trading in the UK since 1998, and the exclusively online retailer now operates seven warehouses–cum-distribution centres throughout the country, which they refer to as ‘fulfilment centres’.

Their facility in Dunfermline, Scotland takes the biscuit in terms of size though. It’s floor space of 1 million square feet is equivalent to 14 football fields!

We all know that Tesco’s is a retail force to be reckoned with in the UK. The grocery giant has a number of distribution centres throughout the UK and Ireland supplying over 3,000 stores, but the £52.4 million building outside of Dublin is the biggest of them all, boasting over 750,000 square feet of floor space. However, even this massive space seems small in comparison to the aforementioned Target warehouse; that’s over double the size!

Although your own business’s warehouse or storage facility may not be as large as those we’ve discussed in this article, no matter the size of a warehouse, good shelving is essential. Here at The Shelving Centre we provide quality used racking in London and throughout the UK. 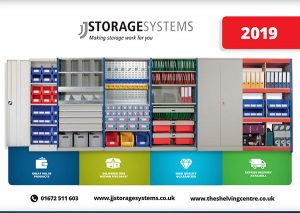